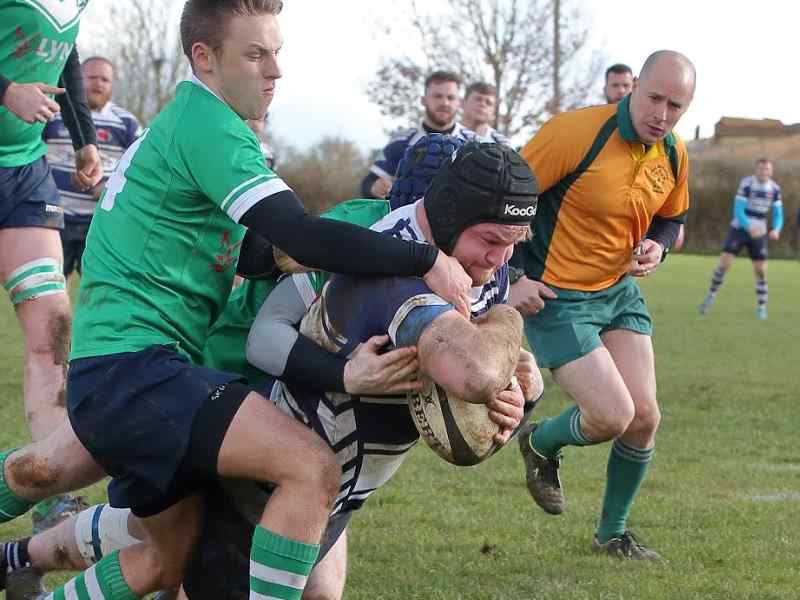 Leighton take another five points on the road.

Leighton Buzzard 1st team were on the road again, this time to Long Buckby, another LBRFC, in Northamptonshire in the latest game in the League campaign. With the latest storm hitting England the Buzzards were playing in one of only two games in their league to survive, although play had to take place on a smaller back pitch as the first team pitch was badly affected by water.

The home side came out the blocks fast and strong, although conditions, yet again, did not make for good open rugby with a strong swirling wind and heavy pitch. After 15 minutes the home side took the lead with a converted try.

Buzzards came right back into the game. Long Buckby were adjudged off side at the restart and from the resulting scrum in the home side 22m area Buzzards recycled the ball well from a number of rucks and then Reece Harris Smith got the ball 10 meters out and drove for the line to score, taking three home players with him. Brett added the conversion making it 7-7. Using the wind which was blowing down into the Leighton Buzzard corner the home team drove from a lineout to score out wide, again the extras were added to make it 14-7. Leighton were not looking rattled at this stage. Indeed, it was a long Buckby player who was yellow carded for a misdemeanour on their 22m. Brett stepped up and slotted the resultant penalty to make the half time score 14-10.

The second half started well with Buzzards using the wind, now at their backs to gain possession deep in the home half. Taking the ball at a lineout not far from the try line Buzzards went through eight phases before Andy Harris Smith crashed over the line to add to his brothers earlier try.

Buzzards now started to gain control of the game, although the home side were fighting hard for every ball. A scrum on the home side 22m line to the Buzzards resulted in a quick pick from scrum half Brett. Two fast passes saw winger James Pratt step inside his opposite number to score to the right of the posts. Walker added the points to make it 14-22.

Th referee thought that a contact to the face of Leighton second row Ed Taylor from a Long Buckby player was enough to warrant a full red card so the home side had to play the remaining 23 minutes with only 14 players. Five minutes later Leighton hooker Luke Stanbridge was given a break for 10 minutes by the referee, which resulted in the scrums going uncontested as Leightion had already used their replacement front row players through injury. There was much talk on the touch line about Leighton having to lose another player but the referee’s interpretation of the laws was proved correct and the game continued 14 against 14 for 10 minutes.

This spurred on Long Buckby who did everything they could to get back in the game but some strong Buzzard defence and great clearance kicks from returning fly half Lee Walker kept them out. Walker extended the Buzzard lead with five minutes to go when he slotted over a penalty to make it 14-25.

The game was not over though as a great pick up in midfield and his usual dancing run meant that Harry Sayer went over for the bonus point try right at the death, although the conversion was missed the winning score of 14-30 and a the 5 league points away from home was a satisfactory afternoons work for the Buzzards.

Next week could prove crucial in the league standings as first place Leighton play second place Leicester Forest and third place Belgrave play fourth place Market Bosworth. With only five games left in the league, Leighton are ten point clear at the top. Leighton also have the Intermediate cup final against Malvern in two weeks time so March will be a crucial month for Buzzards.