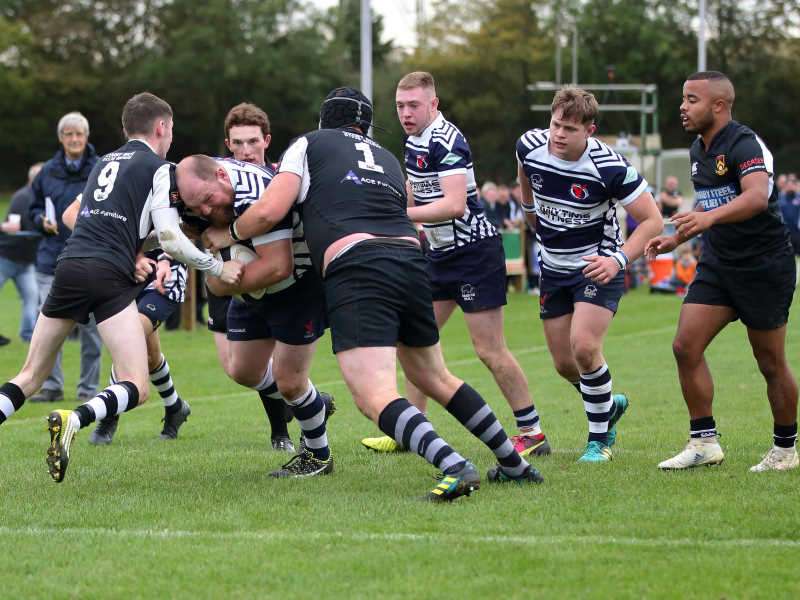 Buzzards kicked off downhill and were quickly awarded a penalty in the Stewart & Lloyds twenty-two. Sensing the opportunity, Zak Tift took a quick tap penalty and passed to Ash Walsh who scored under the posts. With only forty-five seconds played, Buzzards were ahead. Zak Tift scored himself two minutes later and, with Ollie Gronert converting both, Buzzards led 14-0.

In the next eight minutes, Buzzards scored three further tries through winger Ellis Bisgrove, captain and centre Jack Whitehouse and scrum-half James Brett. Brett, who had now taken over the kicking duties, converted his own try to put Leighton 31-0 ahead with only eleven minutes played.

Despite being completely in control, Buzzards seemed keen to keep the pressure on. Ellis Bisgrove scored further tries in the sixteenth and twenty- first minutes to record a hat-trick on his home league debut  –  sandwiched between these scores, Reece Harris-Smith added his own try. With only a fraction over a quarter of the game played,  Leighton led 48-0.

Stewart & Lloyds did finally make it to the Buzzards twenty-two after thirty minutes and did briefly have an opportunity from an attacking line out. However the Buzzard  defence held firm and normal service was resumed when Harri Sayer ran from deep in his own half for a fine individual try. There remained time in the first half for Arran Perry and Jacob Murtagh to add further tries.

In an amazing first half, Buzzards had scored eleven tries and, with six of them converted, Leighton led 67-0.

Somewhat inevitably, the intensity and the speed of the game dropped slightly in the second–half. The fact that injuries in the Stewart & Lloyds front row meant that the scrums were uncontested throughout the half also helped take a competitive edge off proceedings.

Rather surprisingly, all of Buzzards’ five second- half tries were scored by forwards – although the mobility of the pack and the ease of interchange between positions have both been features of Leighton’s play this season. Back – row forwards Wills Messum and Andy Harris Smith scored the first two tries of the half, before Andy’s brother Reece scored again. With James Brett converting one of these three tries, Buzzards led 84-0.

The final two tries came from an unexpected source with prop Jon Henkes scoring both – the second from fully 40 metres out, making the final score 94-0.

Whilst there will be harder tests ahead, this was a fine performance and despite the total control, Leighton maintained team work and structure throughout. Buzzards are second in the league, due to missing out on a bonus point in an earlier game, but have scored more and conceded fewer points than any other team in the league.

Next week Buzzards welcome Stratford upon Avon to Wright’s Meadow in the Intermediate cup before returning to league duties away at Belgrave the following week.