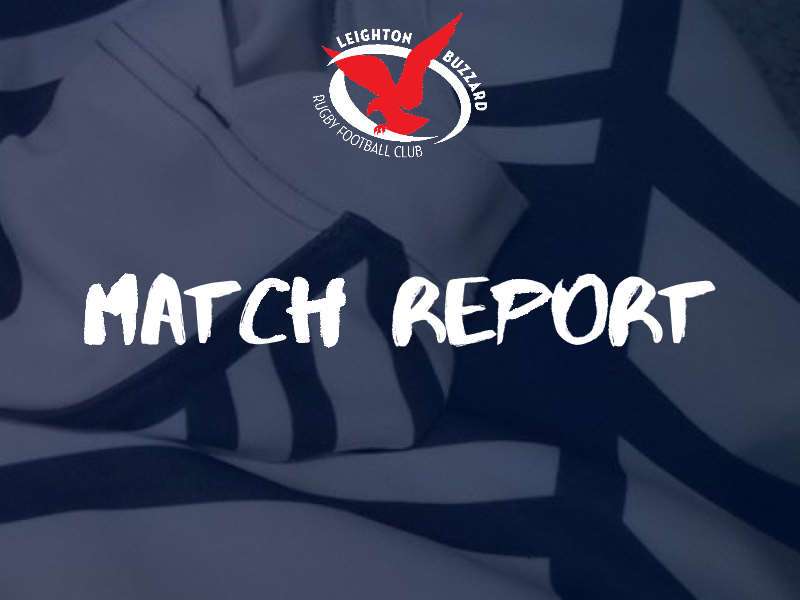 For our second meeting this season with Ampthill Under 13s, we had a strong squad of 18 players. The Forwards were made up of  Ben R, Fin, George, James, Jack O, Louie, Remy Will M and Will P. The Backs were made up of Billy T, Charlie, Ed, Harry P, Harry W, Isaac, Jack C, Lewis and Sasha. Ably led by the coaching team of Harry, Nathan, Dave and Anthony.

Conditions were perfect for playing on this fine Autumn morning. The boys showed great enthusiasm in the pre-match warm-up. They were clearly up for this match. Harry gave the squad clear instructions including scoring at least three tries from the wings in the first half!

Buzzards kicked-off the match and were straight on to their opponents attacking with gusto and purpose. Ampthill were on the back foot due to good early pressure but that came with a price. Fin, on one of his trademark direct runs took a big hit which ended his match prematurely. Thankfully, he is okay after being checked out at the local hospital. These Yorkshire lads are made of stern stuff!

The Forwards held the line with solid crunching tackles going in from Ben R, Harry W and James that set the tone for the match in the battle of the forward lines. This good work allowed the Backs to create a number of good passing movements. The team was playing to the game plan set out by Harry and kept their discipline and shape throughout the match.

Just as it seemed that Ampthill might be coming back into the game, Ed drove through switching play from one side of the pitch to the other that led to Jack C nicking the ball, running down the line and touching down for the first try of the match. 1-0 to the Buzzards and much deserved. Buzzards kept the momentum going, exemplified by Lewis putting in a strong tackle to break up an Ampthill attack.

Against the early run of play, inexplicably, Ampthill ran in three tries in quick succession to go in 3-1 up at the half-time interval.

However, the boys were undaunted and following a pep talk from Harry and the coaches, they came out all guns blazing in the second half. Ampthill kicked-off but were soon on the back foot. A good scrum with Jack O, Louie and Will P in the front row doing their jobs led to the ball landing in the hands of Lewis who raced through to score and reduce the arrears to 2-3.

Good play by the Backs with Billy T and Sasha causing headaches in the Ampthill defence led to Charlie stealing in on the wing to run in our third try. 3-3 and all to play for.

Good defensive pressure by the Buzzards meant there was no let up for Ampthill and yet another solid scrum saw Ed prosper from it and score a try. 4-3 to the Buzzards. But the lead was short-lived, as Ampthill despite stout defending by the boys managed to get over the try line to even matters up. 4-4 and the match set up nicely.

Isaac and Harry P were working well, supported by Harry W who along with Lewis was orchestrating play all around the field, enabling the Backs to pass along the line and switch play to such good effect.

Remy put in another of his crunching tackles following the lead of James, that reiterated the intention of the Buzzards that this was their game for the taking. Lewis using his ingenuity snuck in for a try, only for his father, as referee for the second half, to disallow it! Interesting conversations to be had by father and son on the way home no doubt!

Quick thinking by Lewis led to Will M running in to score the try that would give the team the lead which it would not surrender. 5-4 to the Buzzards. This was soon followed by another try following a fine scrum with George in the thick of it that led to Lewis scoring. 6-4 to the Buzzards. Straight from the kick-off, Lewis picked up the ball and ran almost the entire length of the pitch cutting a swathe through the opposition to score yet another try. 7-4 to the Buzzards.

The boys were by now in a rampant mood and a driving run from Remy led to pressure in the Ampthill half. The boys secured the ball, with quick thinking and a powerful drive this led to Will P to score under the Ampthill defenders. 8-4 to the Buzzards. Harry W kept up the pressure with a direct run that was halted by desperate Ampthill defending just short of the try line. Ampthill rallied and were sure of a certain try until an excellent tap tackle by Remy thwarted their ambitions once more.

With time running out, Ampthill surged forward in search of a consolation try but the Buzzards were defending stoutly, which led to an interception by Lewis, who yet again ran almost the full length of the pitch to score the final try of the match. 9-4 to the Buzzards and the match ended.

Congratulations to the Buzzards. Commiserations to Ampthill, The match was played in a fine spirit with excellent sportsmanship shown by both teams.

As always, Ampthill were most welcoming and hospitable with both teams sitting down together to enjoy well-earned tucker.

Man of the Match was Remy, with Jack C, James and Lewis all close contenders for this accolade.