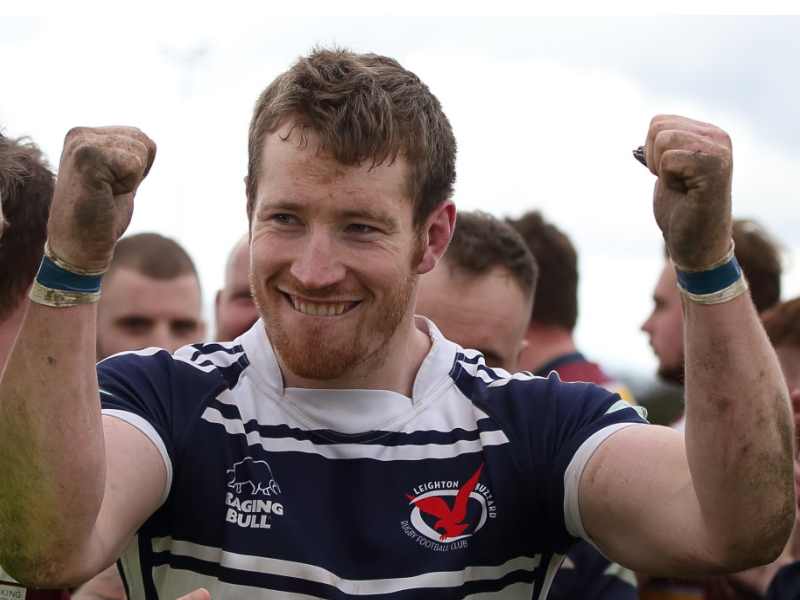 In front of a noisy and good–natured crowd of approximately 600, Leighton Buzzard delivered their best performance of the season to defeat a spirited and talented Malvern side to become RFU Midlands Intermediate Cup Champions.  With a dominant pack, fierce tackling and speed and vision in attack, this was close to a complete team performance.

Malvern, who had brought coach loads of supporters, kicked off uphill but with the benefit of the breeze. The visitors took an early lead with a penalty after seven minutes. However, they would only hold the lead for three minutes, as, after good continuity through the phases, sharp handling put Euan Irwin clear to score in the corner. The difficult conversion was missed to leave Buzzards 5-3 ahead. Shortly afterwards Leighton could have gone further ahead after an excellent break by Ewan Starling and then James Pratt but the clear overlap was missed as the wrong option was taken.

The home crowds early optimism took a blow after fourteen minutes when Euan Irwin as shown a very harsh red card. Initially the referee appeared to be awarding a scrum but the touch-judge drew his attention to what he apparently believed was a high tackle. As, uniquely in such incidents, there was no reaction from either the Malvern crowd or players to the alleged offence, it came as a complete surprise to everyone on the ground, except the two officials, when the red card was shown. However, Leighton were determined that this was to be their day and perhaps the decision galvanised the team, who thereafter tackled as if their lives depended on it.

The pack was now dominating, not just at the scrum but also at the breakdown and winning collisions on the gain line. It came as little surprise when Buzzards prop Russ Orr Burns, added a second try following a twenty metre driving maul. Again the difficult conversion was missed to leave Leighton 10-3 ahead. Malvern did have a threatening period after half-an hour. This started after an interception but Buzzards speedsters Eddie Wiggins and Harri Sayer got back to prevent conceding a try and, shortly afterwards, Ash Walsh made an exceptional try-saving tackle.  All the visitors took from this period of pressure was a penalty, 10-6, from their experienced fly-half. The visitors’ inability to cross the try-line in the first-half when their opportunities arose, was put into sharp perspective shortly afterwards –  a brilliant break by Eddie Wiggins and quick recycling put James Pratt clear to score Leighton’s third try in the corner. Once again the conversion was missed but Buzzards led 15-6 at half-time.

The second half began with Buzzard attacking and a Ewan Starling penalty stretched the lead to 18-6 after six minutes. However Malvern, who have an excellent record in their corresponding league, were doughty and committed opponents. Kicking a penalty to the corner, they drove the resulting maul over, to reduce the lead to 18-11.

With almost half-an–hour left, the game was in the balance. However any fear that Leighton might suffer from exhaustion with the extra effort of playing with fourteen men proved groundless. A two- try burst in five minutes mid-way through the half put Buzzards firmly in control. Firstly, a drive from the ubiquitous Ash Walsh led to a try by Eddie Wiggins. Secondly, a brilliant diagonal kick from Ewan Starling had resulted in a visitors’ line-out close to their line. When the throw going loose, Jon Henkes swooped and powered over from four metres. Starling converted both to leave Leighton 32-11 ahead, with only a quarter of the match to go.

The remaining minutes remained competitive and Leighton used the chance to ensure all seven replacements got cup final game time. Late yellow cards to Zak Tift and Luke Stanbridge did not help Leighton’s game continuity but that is not to take away from Malvern who scored a fine try late on, following good handling and speedy finishing. This left the final score at 32-16 with credit to two fine sides producing a hugely entertaining game of rugby.

There were scenes of jubilation at the final whistle from the majority of the 600 strong crowd and generous and sporting congratulations from the whole of the Malvern Club.

This was a great day in Buzzard history – it would be unfair to single out a particular player as, to a man, they were splendid. Many congratulations though to head coach Tom Mowbray and his coaching staff for not only organising tactics and skills but instilling a belief and team spirit that proved vital.

The national semi -final will be against Yorkshire side, Old Brodleians at Wrights Meadow on 11th April, with a place in the final at Twickenham for the winners.

Next week Buzzards return to league duty, hosting Market Bosworth, the only side to have beaten them this year.

Photos can be found here