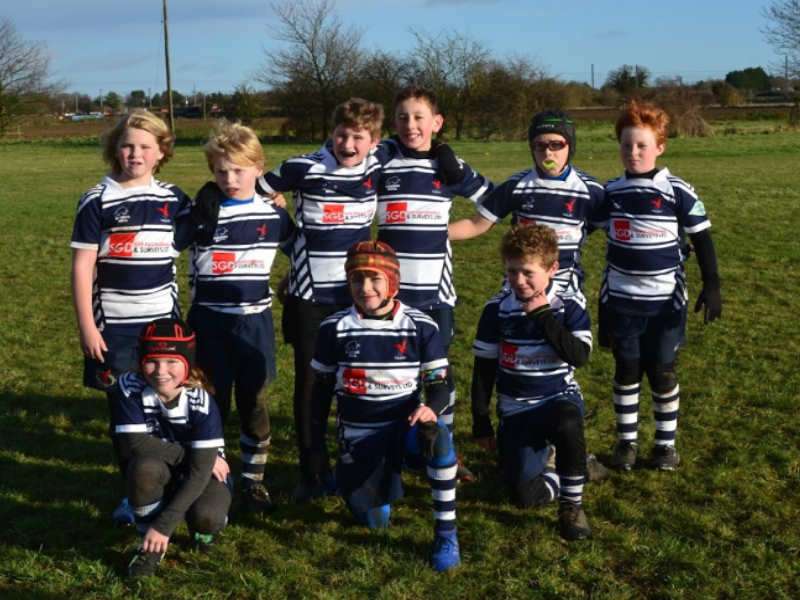 With confidence high after a good team performance at Banbury the last time out, our Under 11s made the trip to our friends at the opposite side of the County.  With nine players pulling out due to illness, it was touch and go as to whether we would be able to field a competitive team at all, but we had nine players ready to pull on the jersey by 10:15 (and a special mention to two more: Jamie and James who chose to travel despite feeling unwell but sadly weren’t well enough to play).
Intensity was clear to see from the warm up, with quick hands and committed tackling from all and this followed through to our matches, when our committed and eager opponents had no answer to the relentless tackling and pressure brought upon them by our budding forwards.  Some excellent running and unselfish passing (yes, Ted, we mean you) led to some fantastic team tries as several players took advantage of the absence of some of their more established teammates to demonstrate just what they are capable of.
New signing Jack demonstrated his potential as he pestered and harried his opponents at every opportunity, whilst Ewan and Sam were strong in the tackle and both weighed in with tries as well.  Hannah organised those around her well and showed great game awareness whilst Oli and Geordan were physical throughout and rucked brilliantly.  Combined with some excellent running and creative kicking from Oscar and a frankly ridiculous number of tackles from player of the day Callum, the future seems bright for this team.
For our final game, we decided to combine the two clubs to make two mixed teams and the coaches were very proud of the teamwork that the Buzzards showed when playing alongside our hosts, especially when it enabled a couple of Biggleswade’s players to score their first individual tries of the day and ensured that everyone finished the session with smiles on their faces.
Pictuires of the day can be found here
Biggleswade Pictures